Shipping will be same day or next business day on most orders.

The Silver Heavy Duty Gimbal Brackets that are in some mount pictures are NOT included with any mount. They are optional and can be purchased here.

Bass Boat Technologies is dedicated to creating new innovations for mounting GPS/Sonar units to their Boat Consoles. We think Anglers will look at Console mounted GPS/Sonar units from a totally different mindset than in the past.

After fishing the FLW Tour for three years as a co-angler and last year as a Professional, I rode in many different boats.  All of the anglers had the same problems with keeping their Console mounted GPS/Sonar units from moving all over the place in rough water and had to look thru or over their steering wheel to see their in-dash units. My goal was to create a new mounting system that was user friendly, rugged, and looked factory. After many hours of testing, the first Single mount unit was installed on Randall Tharp’s Ranger z520 and my z520 during the 2011/2012 tour season. The Mount performed very well and eliminated the old “Ram” mount system. Each mounting system is custom fitted for each type and size GPS/Sonar unit for that particular console and all mounting systems have an “Anti-vibration system” integrated into the mount. This system performed excellent in big water like Lake Champlain and other rough water lakes.

I noticed that there were many Anglers that had a 2 unit setup, 1 mounted in the console and 1 on a “ram” mount to the right side of the console. My next goal was to mount 2 units side by side on the console so the angler could see both units above the steering wheel, at the correct viewing angle, providing easy operation of the units. That is when the New Dual Mount system was developed. The new Dual Mount system also has the “Anti-vibration” system for each of the units. The system was developed for the new Ranger Z boats (z117-z522) type consoles and the new Ranger 520C Boat. I started with these because that was the model boats available to me for fitting the units.

The plans for the future are to develop the “Single” and “Dual” mount system for other brand boats also. The biggest hurdle is locating and being able to use other brand boats for their own custom fitting. I have had many requests to develop mounts for Skeeter, Triton, Legend, and Phoenix Boat brands. I plan to develop these in the near future. This system is not just a “bracket”, but a custom mounting system.

A Special “Thank you” to Dalton Marine and Jet-A-Marine for allowing me to borrow GPS units and to come to their dealer to custom fit for the Ranger Boat models.

Please click on the products page and view the different units available.

HOW TO SQUEEZE BIG-SCREEN CAPABILITIES INTO A SMALLER SPACE 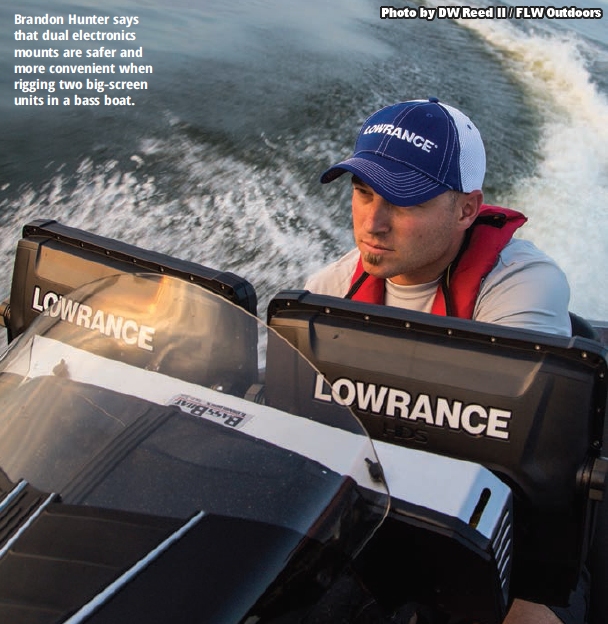 Wide-screen mania has become so pronounced that some offshore specialists are mounting dual GPS/sonar units in their boats to utilize the premium mapping and fish-finding capabilities that Lowrance and other industry leaders are building into their electronics.

Originally this meant mounting one unit to the boat’s gunwale or outer console wall with an aftermarket mount and flush-mounting the other in the dash.

While many anglers continue to mount their units that way, a growing number of pro and weekend anglers are making the switch to some cool new custom dual-mounting systems available through Bass Boat Technologies.